When people are first exposed to Shiny code like this, the most common question is, “How does Shiny know that output$plot reads input$rows?” And the most common guess is that Shiny parses the body of the renderPlot() code block, looking for symbols that seem to be relevant for reactivity, the same way a human being would. If that strikes you as a fragile approach, I agree. Even a change as simple as giving input a new name would break things:

So, no, that’s not the way Shiny works. In computer science, that approach is called static analysis, because it looks at the code without running it. Instead, Shiny is using dynamic instrumentation, where as the code is run it collects additional information about what’s going on.

Before the plot output begins executing, it creates an object that’s internal to Shiny called a reactive context. As an app author, you’ll never create or see one of these objects directly, but they’re very important in the implementation of Shiny. The reactive context doesn’t represent the plot output as a whole, but just a single execution of the output. If, over the life of a Shiny session, the plot is (re)rendered a dozen times, then a dozen reactive contexts will have been created.

The Shiny package has a top-level variable (like a global variable, but one only visible to code inside the Shiny package) that is always pointing to the “current” or “active” reactive context. The plot output assigns its new context to this variable, then executes its code block, then restores the previous value of the variable. Basically like this code sketch (for illustrative purposes only):

You might be able to see where this is going. While a reactive consumer is executing, it creates a context object and puts it in a globally accessible variable, making it possible for any other code to invalidate that context at any point in the future.

Each time a reactive value is modified, or a reactive expression is invalidated, it calls invalidate() on each dependent context. This invalidates the corresponding reactive consumer objects.

In summary, the way Shiny “magically” establishes the connections between dependency and dependant really comes to these two simple mechanisms: each reactive consumer creates a context object and installs it in a global location during execution, and each reactive producer augments every read operation by grabbing the context object so it can be later invalidated. There is no way that Shiny can accidentally overlook a reactive dependency relationship, or establish one erroneously (though there are a few ways to instruct Shiny to intentionally overlook reactive dependencies, as we’ll see later).

15.2 A step-by-step tour of reactive execution

Here’s an illustrated version of a reactive graph. 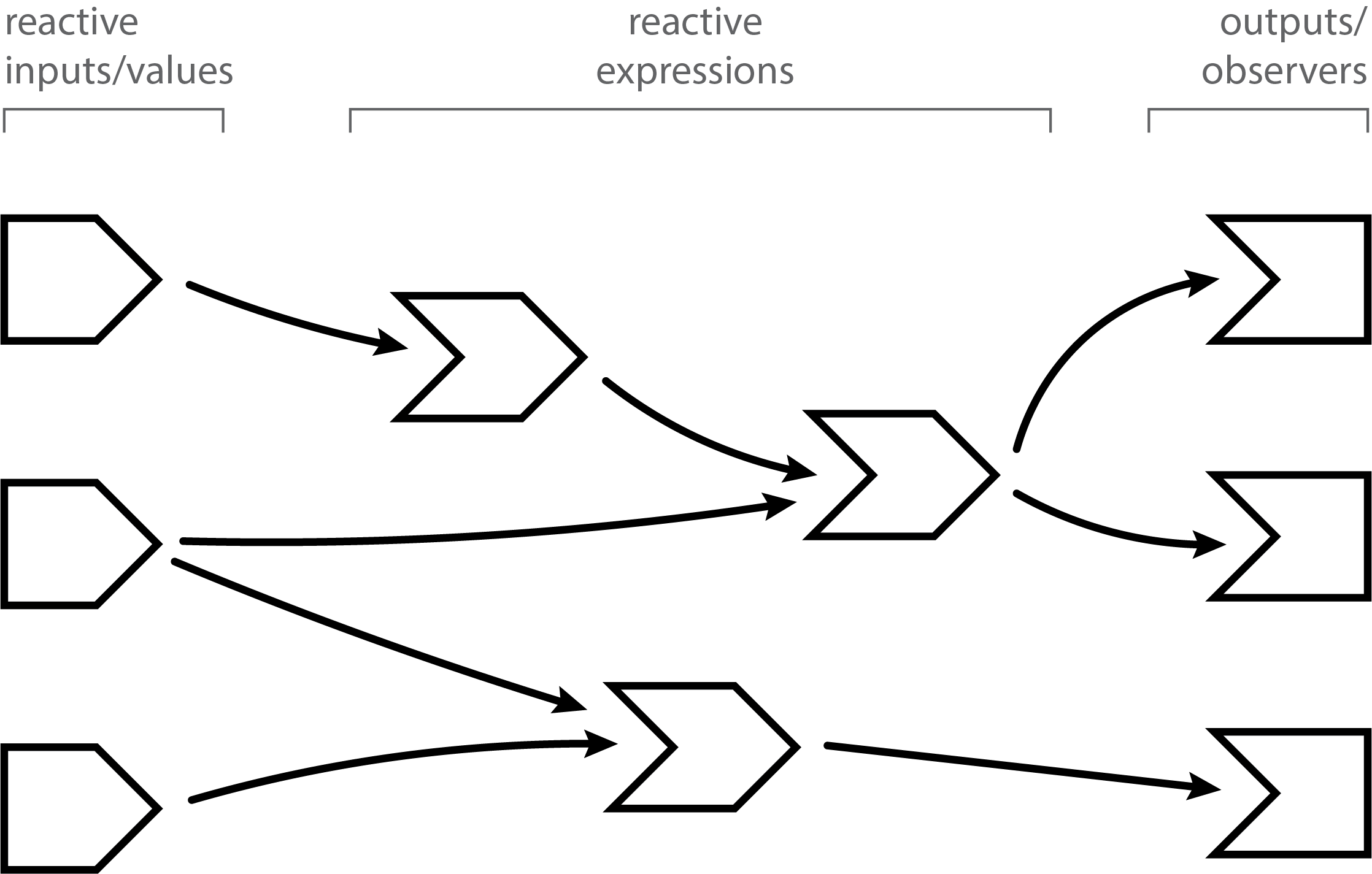 The lines between the shapes are directional, with the arrows indicating the direction of reactivity–we’ll see in a moment why this means the arrows go from left to right, instead of from right to left.

Now we’ll follow along, step by step, as a Shiny app is loaded and these reactive relationships are discovered, formed, destroyed, and reformed.

When a reactive app is visited and a session begins, the server function is executed and the reactive objects are created. However, Shiny has no a priori knowledge of the relationships (lines) between the objects. As you can see in the following diagram, the shapes are all present but there are no lines yet.

Now that the session has been initialized, we can begin the execution phase. In this phase, Shiny picks an invalidated observer (not a reactive expression) and starts executing it. In the diagrams below, we use a green fill to indicate when a node is actively executing.

(You may wonder how Shiny decides which of the several invalidated observers/outputs to execute. The short answer is that you should act as if it’s random. Ideally, your observers and especially outputs won’t care what order they execute in, as each will function independently from the others. However, if you do have observers whose side effects must always happen in a certain relative order, you can use the observe function’s priority argument to dictate that order for observers. You can also control the priority of outputs by calling the outputOptions() function with a priority argument.)

During an observer’s execution, it may read one or more reactive expressions. As soon as this occurs, a dependency/dependent relationship is established between the reactive expression and the observer, represented below by the arrow. The arrow points from left to right; this is the direction that reactivity will flow, as we’ll see in a moment.

This particular reactive expression happens to read a reactive input. Again, a dependency/dependent relationship is established, so we add another arrow.

Unlike reactive expressions and observers, reactive inputs have nothing to execute, since they simply represent a variable. So the input doesn’t turn green, we just immediately get its current value.

Now that the reactive expression has returned its value to the observer, the observer can complete executing its code. When this has completed, it too enters the idle state, so we change its fill color to white.

Now that Shiny has completed execution of the first observer, it chooses a second one to execute. Again, it turns green, and may read values from invalidated reactive expressions, which will turn green, and so on. This cycle will repeat until every invalidated observer enters the idle (white) state.

At last, all of the observers have finished execution and are now idle. This round of reactive execution is complete, and nothing will happen with this session until some external force acts on the system (e.g. the user of the Shiny app moving a slider in the user interface). In reactive terms, this session is now at rest.

I didn’t mention it before, but when Shiny outputs finish executing, they don’t immediately update the output in the browser. Instead, all of the new outputs are held until this point, at which time they are “flushed” to the browser all at once32.

Just as important: we also know which nodes are not dependent on each other. If no path exists from a particular reactive input to a particular output (always traveling in the direction that the arrows are pointing), then a change to that input couldn’t possibly have an effect on that output. That gives us the ability to state with confidence that we don’t need to refresh that output when that input changes, which is great–the less work we need to do, the sooner we can get results back to the user.

The previous step left off with our Shiny session in a fully idle state. Now imagine that the user of the application changes the value of a slider. This causes the browser to send a message to their server, instructing Shiny to update the corresponding reactive input.

Now, we follow the arrows that we drew earlier. Each reactive expression and observer that we come across is put into invalidated state, then we continue following the arrows out of that node. As a refresher, for observers, the invalidated state means “should be executed as soon as Shiny gets a chance”, and for reactive expressions, it means “must execute the next time its value is requested”.

Next, each invalidated reactive expression and observer “erases” all of the arrows coming in or out of it. You can think of each arrow as a one-shot notification that will fire the next time a value changes. Not every time, just the next time. So all of the arrows coming out of a reactive expression are safe to erase; like a used bottle rocket, they’ve fired their one shot.

It may seem perverse that we put so much value on those relationships, and now we’re going out of our way to erase them! But the truth is, though these particular arrows were important, they are now themselves out of date. The only way to ensure that our graph stays accurate is to erase arrows when they become stale, and let Shiny rediscover the relationships around these nodes as they reexecute.

This marks the end of the invalidation phase.

Now we’re in a pretty similar situation to when the Shiny session first started; we have some invalidated reactive expressions and outputs, and we don’t have any arrows coming in or out of them. It’s time to do exactly what we did then: execute the invalidated outputs/observers, one at a time.

What’s different this time, though, is that not all of the reactive expressions and outputs are starting out in the invalidated state. Some parts of the graph weren’t affected–neither directly nor indirectly–by the reactive input that had changed. That’s great, as we won’t need to reexecute those parts of the graph, even if they are used again by some of the invalidated parts!

But in fact, the graph either looks like this or that, depending on the value of input$choice.

This is because shiny dynamically constructs the graph.