In this chapter, we’ll create a simple Shiny app. I’ll start by showing you the minimum boilerplate needed for a Shiny app, and then you’ll learn how to start and stop it. Next you’ll learn the two key components of every Shiny app: the UI (short for user interface) which defines how your app looks, and the server function which defines how your app works. Shiny uses reactive programming to automatically update outputs when inputs change so we’ll finish off the chapter by learning the third important component of Shiny apps: reactive expressions.

If you haven’t already installed Shiny, install it now with:

If you’ve already installed Shiny, use packageVersion("shiny") to check that you have version 1.5.0 or greater.

Then load in your current R session:

There are several ways to create a Shiny app. The simplest is to create a new directory for your app, and put a single file called app.R in it. This app.R file will be used to tell Shiny both how your app should look, and how it should behave.

Try it out by creating a new directory, and adding an app.R file that looks like this:

This is a complete, if trivial, Shiny app! Looking closely at the code above, our app.R does four things:

RStudio Tip: There are two convenient ways to create a new app in RStudio:

There are a few ways you can run this app:

Figure 1.1: The Run App button can be found at the top-right of the source pane.

Pick one of these options, and check that you see the same app as in Figure 1.2. Congratulations! You’ve made your first Shiny app. 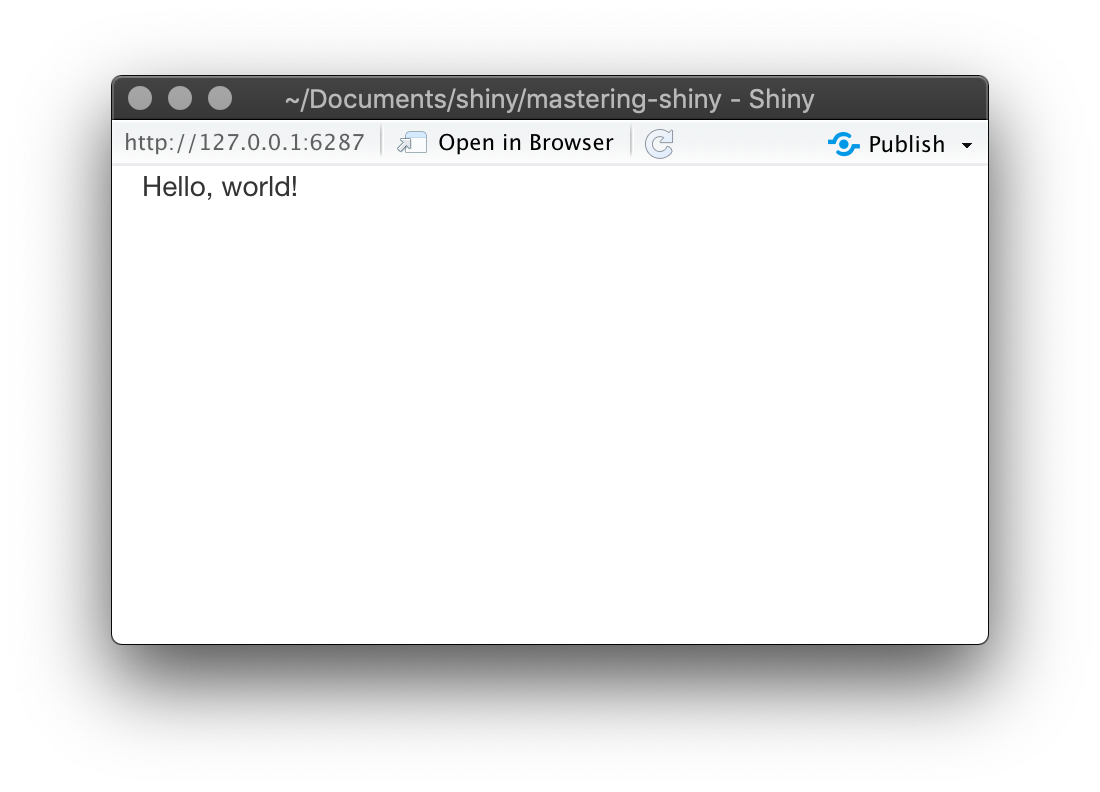 Figure 1.2: The very basic shiny app you’ll see when you run the code above

Before you close the app, go back to RStudio and look at the R console. You’ll notice that it says something like:

This tells you the URL where your app can be found: 127.0.0.1 is a standard address that means “this computer” and 3827 is a randomly assigned port number. You can enter that URL into any compatible2 web browser to open another copy of your app.

Also notice that R is busy: the R prompt isn’t visible, and the console toolbar displays a stop sign icon. While a Shiny app is running, it “blocks” the R console. This means that you can’t run new commands at the R console until the Shiny app stops.

You can stop the app and return access to the console using any one of these options:

The basic workflow of Shiny app development is to write some code, start the app, play with the app, write some more code, and repeat. If you’re using RStudio, you don’t even need to stop and re-start the app to see your changes — you can either press the Reload app button in the toolbox or use the Cmd/Ctrl + Shift + Enter keyboard shortcut. I’ll cover other workflow patterns in Chapter 5.

Next, we’ll add some inputs and outputs to our UI so it’s not quite so minimal. We’re going to make a very simple app that shows you all the built-in data frames included in the datasets package.

Replace your ui with this code:

Layout functions, inputs, and outputs have different uses, but they are fundamentally the same under the covers: they’re all just fancy ways to generate HTML, and if you call any of them outside of a Shiny app, you’ll see HTML printed out at the console. Don’t be afraid to poke around to see how these various layouts and controls work under the hood.

Go ahead and run the app again. You’ll now see Figure 1.3, a page containing a select box. We only see the input, not the two outputs, because we haven’t yet told Shiny how the input and outputs are related.

Figure 1.3: The datasets app with UI

Next, we’ll bring the outputs to life by defining them in the server function.

Shiny uses reactive programming to make apps interactive. You’ll learn more about reactive programming in Chapter 3, but for now, just be aware that it involves telling Shiny how to perform a computation, not ordering Shiny to actually go do it. It’s like the difference between giving someone a recipe versus demanding that they go make you a sandwich.

We’ll tell Shiny how to fill in the summary and table outputs in the sample app by providing the “recipes” for those outputs. Replace your empty server function with this:

The left-hand side of the assignment operator (<-), output$ID, indicates that you’re providing the recipe for the Shiny output with that ID. The right-hand side of the assignment uses a specific render function to wrap some code that you provide. Each render{Type} function is designed to produce a particular type of output (e.g. text, tables, and plots), and is often paired with a {type}Output function. For example, in this app, renderPrint() is paired with verbatimTextOutput() to display a statistical summary with fixed-width (verbatim) text, and renderTable() is paired with tableOutput() to show the input data in a table.

Run the app again and play around, watching what happens to the output when you change an input. Figure 1.4 shows what you should see when you open the app. 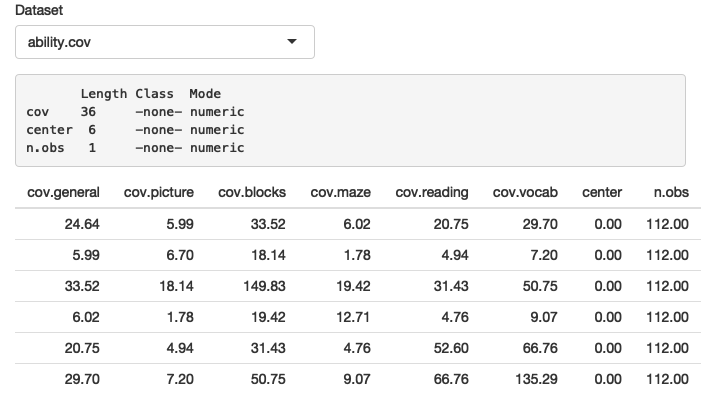 Figure 1.4: Now that we’ve provided a server function that connects outputs and inputs, we have a fully functional app

Notice that the summary and table update whenever you change the input dataset. This dependency is created implicitly because we’ve referred to input$dataset within the output functions. input$dataset is populated with the current value of the UI component with id dataset, and will cause the outputs to automatically update whenever that value changes. This is the essence of reactivity: outputs automatically react (recalculate) when their inputs change.

Even in this simple example, we have some code that’s duplicated: the following line is present in both outputs.

In every kind of programming, it’s poor practice to have duplicated code; it can be computationally wasteful, and more importantly, it increases the difficulty of maintaining or debugging the code. It’s not that important here, but I wanted to illustrate the basic idea in a very simple context.

In traditional R scripting, we use two techniques to deal with duplicated code: either we capture the value using a variable, or capture the computation with a function. Unfortunately neither of these approaches work here, for reasons you’ll learn about in Section 13.2, and we need a new mechanism: reactive expressions.

We can update our server() to use reactive expressions, as shown below. The app behaves identically, but works a little more efficiently because it only needs to retrieve the dataset once, not twice.

We’ll come back to reactive programming multiple times, but even armed with a cursory knowledge of inputs, outputs, and reactive expressions, it’s possible to build quite useful Shiny apps!

In this chapter you’ve created a simple app — it’s not very exciting or useful, but seen how easy it is to construct a web app using your existing R knowledge. In the next two chapters, you’ll learn more about user interfaces and reactive programming, the two basic building blocks of Shiny. Now is a great time to grab a copy of the Shiny cheatsheet. This is a great resource to help jog your memory of the main components of a Shiny app. 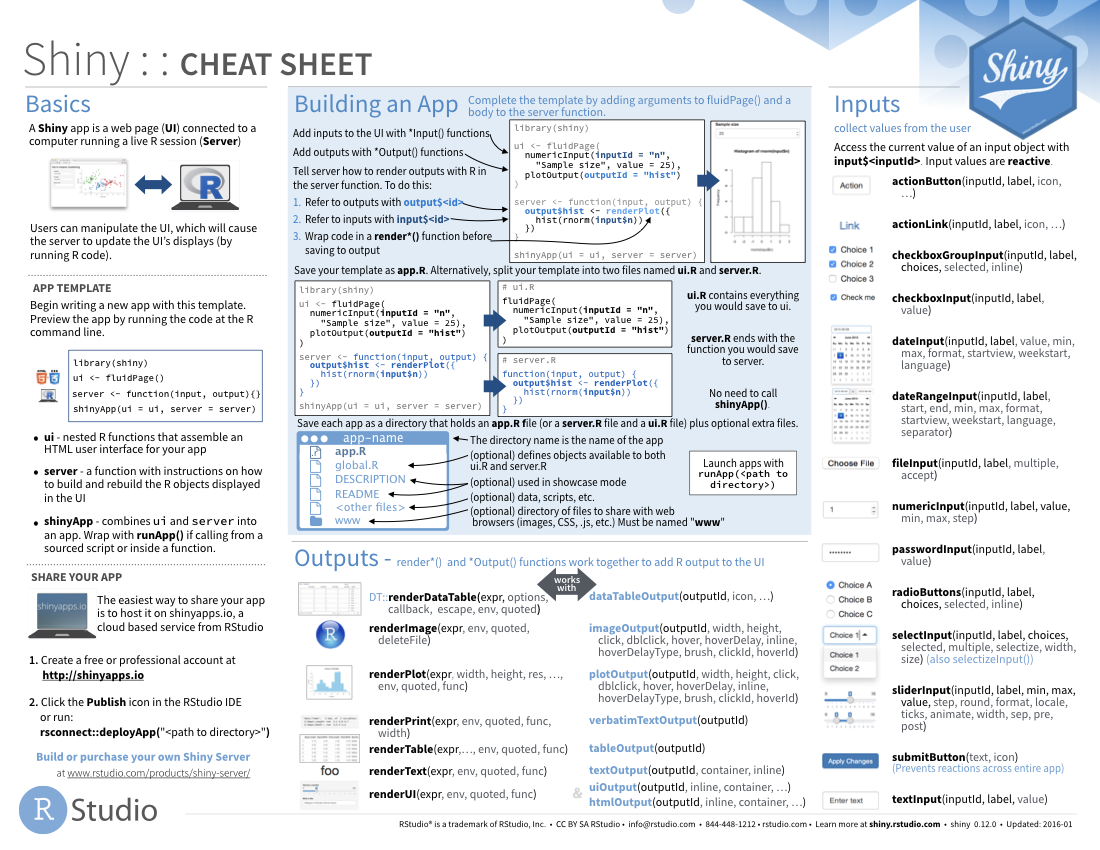